Corinna Lotz wrote ‘Practitioners of Informal art included painters like Soulages, Hartung, Dubuffet, Wols, Michaux and Mathieu. They were frowned upon by the French Establishment. Informal painting shares much with the “Matter” tendency pioneered by Alberto Burri and Antoni Tàpies in focusing on the physical materials used and the process by which they are applied. The content of the work tends to emerge only as the artist applies his or her pigments or other substances.

In the hands of Bowen and his near contemporary, Tàpies, simple materials, including cheap paper, sackcloth and crumpled paper, acquire mental and emotional properties – a kind of metaphysical quality – as the artist exploits random effects and juxtapositions.

In post-war Britain “non-figurative” or “abstract” art, especially the Informal variety, was regarded, as a prime means of alienating the public. “It was therefore left to non-figurative artists to form their own groupings and seek out new exhibition space”, as Margaret Garlake wrote in the first-ever history of Bowen’s New Vision group’.     From Wikipedia.    Denis Bowen (April 5, 1921 – 23 March 2006) was a South African artist, gallery director and promoter of abstractand avant-garde art in Britain.[1][2][3] He was founder of the New Vision Group and the New Vision Centre Gallery, both of which played an important role in the post-World War II British art scene.[1][3]

NEW VISION CENTRE, Another What’s On review by Max Chapman, one is pleased to note, is reproduced on the catalogue for new work by Marcelle van Caillie who used to pleat and gash felt for her reliefs. and now works in ﬁbre-glass. She herself say’s that her paintings have become indestructible. (“They won’t bum: they have to be buried!”) ln effect they have n magically rich view to offer in which no essence of the luxurious sensation is lost; and some times the colours glitter like metal dust from stars, and sometimes all is deep-mined gold, or a chameleon changes to silver on a silver shield. In one case, and against a poison-blue background, bits of rusty metal hang ﬁ’ee to show that one can store up rusty  reasure hereon earth in art’s alchemy. 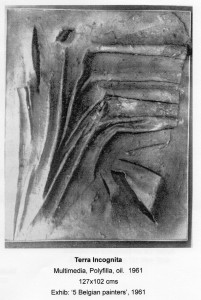 Marcelle Van Caillie is an artist who has evolved her own method of working in fibreglass; the unique textural and colour effects she achieves are subject to chameleon-like transformations as the light shifts over the surfaces that are alternately crinkled as if with age, intricately cataleptic, strong. rugged and melting at the same tirne. The effect is often one of exaggerated magnitude with the mellifluous contours ﬂowing according to their own rhythimic pattern. Yet a work by van Caillie is not a mere imitation of a two-dimensional painting. Each one is the result of a lengthy process in which she sets out to conquer space, and in the process achieves a new form of synthesis of painting and sculpture. She is an artist who needs to open her surface and allow air and eye to penetrate. inevitably there is an element of the grotesque here, just as there is a savage power and authority inherent in them that makes them disturbing. lntimations of ‘Time Epogcny’ and ‘History begins in Sumer’ are two vivid examples.        CONROY MADDOX

Due for publication in the Januarv issue of the Journal of the Belgian Chamber of Commerce in the UK.            2 BELGIAN PAINTERS EXHIBIT IN LONDON

Two of the Belgian painters living in London are in the news at this very moment, each of them having a one-man show, Maurice Jadot, the doyen of them all, at the Molton Gallery, and Marcelle van Caillie at the New Vision. Both have exhibited in England and abroad on numerous occasions either separately or jointly, or concurrently with larger groups, such as the Free Painters‘ Group, for instance, of which Maurice Jadot was a co-founder.                              Marcelle van Caillie, belongs essentially to the Flemish School of Painting, translating into powerful as well as highly colourful abstract constructions a romantic, or rather baroque feeling and things dreamed of, if not seen. Her art is introvert, meditative; Jadot’s extrovert, exuberant. But neither is in any way parochial, pedantic or imitative, a not mean merit at a time when so many attempts at the Abstract remain unashamedly repetitious and therefore meaningless

“One of tlie most startling of the New Vision artists is Marcelle Van Caillie, an abstract expressionist with the particular harsh intensity of her Belgian heritage.”

The New Vision Centre gallery indicates its policy with its name. It has flourished on lively challenging ideas, in spite of being hidden away north of Marble Arch. While many will think it is ‘throwing a pot of paint in the public’s face‘ it is serious in intent and benevolent to young painters and sculptors striving to express and interpret this day and age. (The comparison is invidious but this is what Durand-Ruel did for the Impressionists.) These young artists should be looked at, for their work is provocative, and provocation stimulates the mind -like or dislike – and removes staleness.One of the most startling of the New Vision artists is Marcelle Van Caillie, an abstract expressionist with the particularharsh intensity of her Belgian heritage. Her material is ﬁbreglass which is tom or slashed, then built into swirling folds and then painted in brilliant glazes. The effect is beautiful in the way that a raging sea has its own terrible beauty; or a forest ﬁre; or a 15-inch gun broadside. They evoke the savage instincts latent in all of us, releasing what is pent up.

Other exhibitors on show at the New Vision include Mildred Wohl who is an American whose work appears to be influenced by Motherwell, Gottlieb and Kline. She is therefore at the centre of the New American schools of abstract painting. Nancy Wynne-Jones is from the St. Ives stable which is headed by Peter Lanyon, and has a growing reputationalongside those excellent painters. Michael Rothenstein, best known for his lithographs, is also a constructor withvarying textures of wood and polished metal. He has a smooth, cool execution, and method and proportion in his design.           New Vision Centre, 4 Seymour Place, W I. 1964.

Marcelle  admitted that she painted to satisfy herself and the few people who had insight and understanding which included  Pierre Rouve who wrote   For this exhibition and after reading the reviews of her Paris show, PIERRE ROUVE wrote the following :- 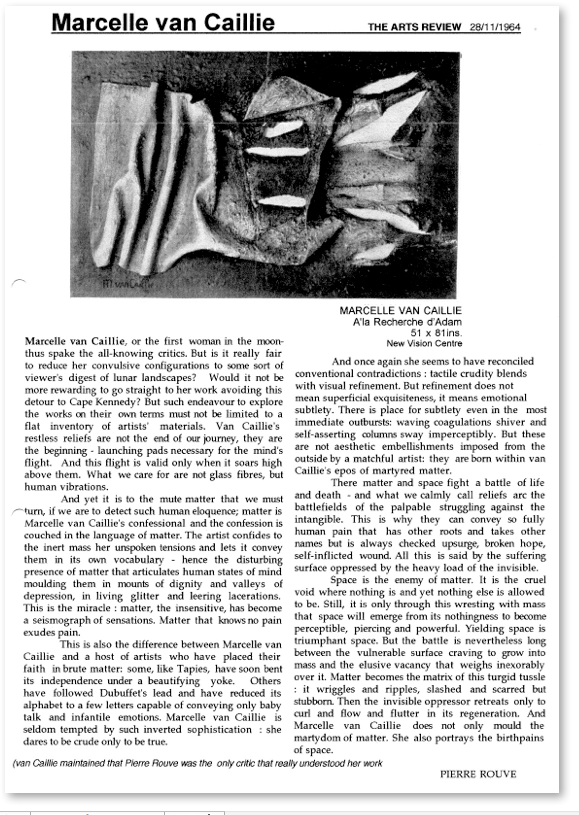 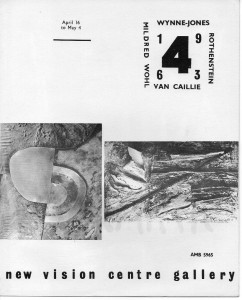