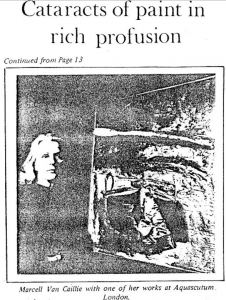 Van Caillie ﬁts into none of those categories. This Belgian who. since 1955 has made Britain her home, began as a serious artist at the time of the tachlstc revolution. ll was its if all the pcnt-up feelings of half the world suddenly boiled over in a cataract of paint splashing over canvas and manmade ﬁbre in rich prufusion.       Her part in all this found a friendly reception in Britain where the New Vision Centre had been making a home for action painting, abstract expressionism and the most advanced forms of the new freedom. (The New Vision Centre has long since closed, but it is signiﬁcant that her first London exhibition was at the Drian Galleries another art laboratory which has managed to survive).   Now because of the personal patronage of Aquascutum managing director, she has  found a fresh background at 100 Regent Slrccl against which  to show her latest work.     Van Caillie is a maker. Early on, her interest in the ﬁat surface was replaced by the build-up of encrusted form  (usually an outcrop in high relief of man-made ﬁbre, supcr-charged with translucient glazes).      She was amongst the ﬁrst to appreciate the dramatic effect of ‘wounding’ the surface (precursing such international ﬁgures as Fontana).  The exhibits at Aquascutum make use of all these discoveries. They represent a stage in the artist’s development when she has been able to sit back and take stock, giving a clearer form to what had previously been forged in the white heat of inspired creation.     These latest works have stayed in character. They have the same sure control of fugitive ﬁbreglass that has always informed her oeuvre. The difference lies in the blaze of colour she has introduced. As one of hcr larger pieces declares: – “Strawberry ﬁelds forever!”                         Sheldon Williams  13/Sept 1969 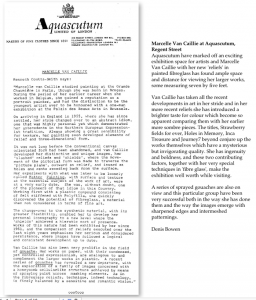