Shown here is a relief by Milares.  He and MvC worked independently and certainly she was unaware of his oeuvre.  Similarities consist of high relief in folds and slashes and both extended beyond the square of the canvas.  He did not use fibreglass and his palette consisted, as shown, of black, crimson and white. 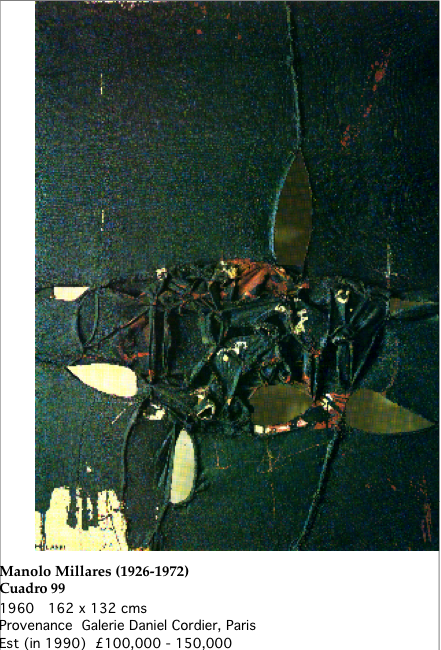 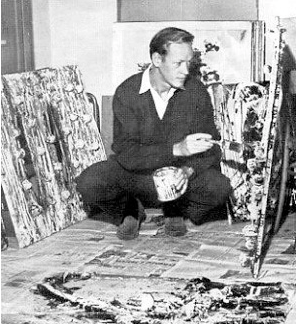 Christo Coetzee, a South African artist (1930-2000) of great virtuosity whose importance has belated been recognised only in his native country.  He was a close friend.  He influenced her  jump into high relief following his stay in Japan.  He did not follow her in her more advanced work but become more representational.       (Note that commercial paints were used – the favourite brand was Ripolin).

Christo’s first seminal solo exhibition at the Hanover Gallery, 1955, then under Erica Brausen, to whom he  had been introduced by his patron, Anthony Denney, the distinguished photographer, stylist and Interior Decorator.

Soon after the Hanover exhibition he went to Japan on a scholarship and returned with a new style, 3D Abstract Expressionist also known as ‘Matter Art’. 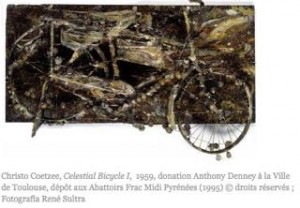 The bicycle was first dropped from a high building when Christo was in Japan.

This was innovative and of greater importance than his previous, and much later,  largely decorative work, but less appreciated.

Marcelle had a number of his works, including the one shown here, which she bought for 50 GBP.→

This photograph of him and Marcelle was sent to me by Bonhams.  I think it was taken on 17 March 1959 opening, when Coetzee and  Lucio Fontana had a joint exhibition at the Stadler gallery  in Paris. ↓ 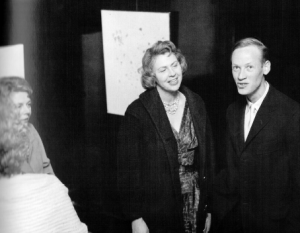 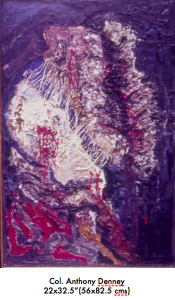 Anthony Denney also admired her work and had examples in his important collection.  Her ‘Petits Pois’ , a constituent of this work, is an early example of ‘Informal’ & ‘matter painting’. →

Informal painting shares much with the “Matter” tendency pioneered by Alberto Burri and Antoni Tàpies in focusing on the physical materials used and the process by which they are applied. The content of the work tends to emerge only as the artist applies his or her pigments or other substances. (Corinna Lotz)

She often visited his house at 30 St Peters Square where she saw, and admired work by the following artists. 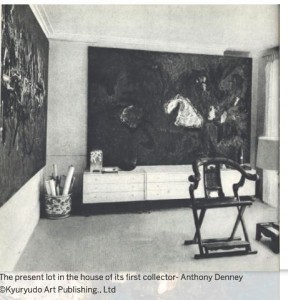 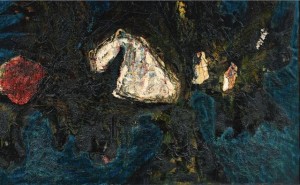 The picture just seen on the left (above) was Mathieu’s huge ‘Battle of Hastings’ lent to the Tate gallery.

( https://georges-mathieu.fr/en/2015/03/la-bataille-de-hastings-the-battle-of-hastings-exhibited-at-the-abattoirs-museum-in-toulouse/ )  Marcelle had also seen it at the ICA exhibition when the high impasto was still wet, which worried her.  Anthony bought this, with others, from after the show, the thick impasto (tubism) still being soft and making them virtually unsaleable.

This illustrates the provincialism of the English art establishment at that time.   Erica Brausen, of the Hanover Gallery, had told Marcelle, who had just arrived in London, that there were no more than 20 people in England who understood Avante Garde Art.  Marcelle repeated this to Anthony who roared with laughter. “She exaggerates!  There are no more than ten!”.   If only the Tate had been buying these pictures for practically nothing!   It has changed and is now a world leader. 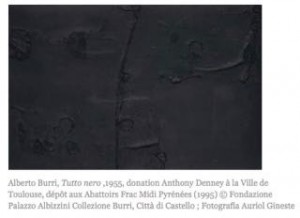 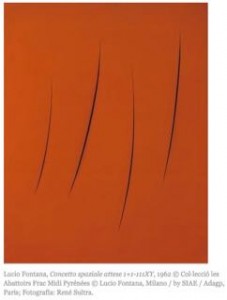 She was less enthusiastic about Fontana who also slashed his canvases but highly controlled and on a plain colour background (above).   She despised highly repetitive work, although commercially popular, which she regarded as closer to craft than art. 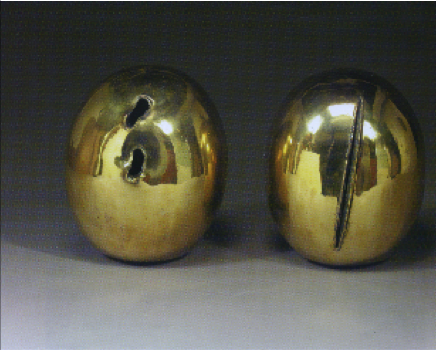 Above is unusual work by Fontana.  At his Paris Stadler exhibition with Christo Coetzee, Marcelle met him and described her technique of covering balloons on her canvas with cloth and plaster then pricking and removing the balloon and and applying fibreglsss and paint.  He noted her name as ‘balloon girl from London’ and soon after produced this superb ceramic series. ” No-one knows how he can do them”.

As indicated by Erica Brausen, this was a poor era for art in England.  Taste was provincial (see above) and painters such as Annigoni were admired.  Social realism’, easy abstract, & Peter Blake  were accepted by the more aware public and critics.   The best was Francis Bacon.  Anthony had a large example of his work in his dining room at St Peters Sq.   Marcelle regarded his work as ‘invertebrate painting’ and was not duly impressed.  She recognised Grahame Sutherland but on the whole, apart from sculpture, regarded art in England as underwhelming.r

Later Bridget Riley and ‘Op Art’ ( https://en.wikipedia.org/wiki/Bridget_Riley ) and ‘Pop’ did not exactly excite her. 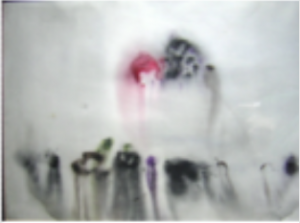 Newcombe.. Watercolour on paper.  (HAS)

He admired Marcelle’s work and attempted something similar which was not a success. 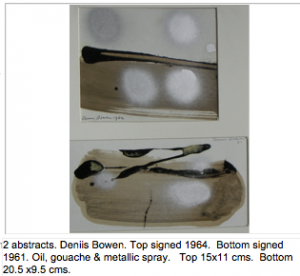 Denis Bowen has played a unique – but little known – role in the history of contemporary art in Britain and internationally since the mid-1950s. ….. “Bowen quickly developed an artistic pantheon,” Peter Davies writes. He was impressed by “gestural, informal painting [which] exploited chance and accident as part of an imaginative manipulation of paint”.

Practitioners of Informal art included painters like Soulages, Hartung, Dubuffet, Wols, Michaux and Mathieu. They were frowned upon by the French Establishment. Informal painting shares much with the “Matter” tendency pioneered by Alberto Burri and Antoni Tàpies in focusing on the physical materials used and the process by which they are applied. The content of the work tends to emerge only as the artist applies his or her pigments or other substances. …. In the hands of Bowen and his near contemporary, Tàpies, simple materials, including cheap paper, sackcloth and crumpled paper, acquire mental and emotional properties – a kind of metaphysical quality – as the artist exploits random effects and juxtapositions.

In post-war Britain “non-figurative” or “abstract” art, especially the Informal variety, was regarded, as a prime means of alienating the public. “It was therefore left to non-figurative artists to form their own groupings and seek out new exhibition space”, as Margaret Garlake wrote in the first-ever history of Bowen’s New Vision group.    By Corinna Lotz (extract).   (See http://www.vancaillieartist.co.uk/new-vision-gallery-1964/ )