The conventional canvas orientated form became abandoned, with her pioneering use of fibreglass as an ‘artistic medium’.  The movement of the pictorial form was made to traverse the ‘picture plane’, outward as relief, and inward as holes and rents receding back from the surface.    Marcelle developed her distinctive and unique images, her ‘slashed’ reliefs and ‘shields’. 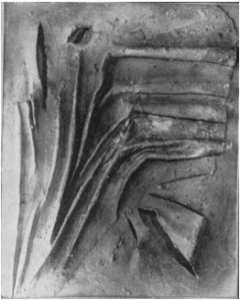 ‘Terra incognita’.   Possibly the first of this series.  Oil on polyfilla , felt & canvas.

No colour photograph is available but largely monochrome olive green. 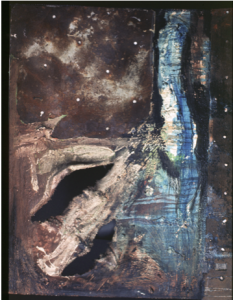 Multimedia, scrap iron polyfilla and oil on canvas.  60×49” (152×125 cms).  An early example of this series before fibreglass was extensively used.   The change-over to the synthetic materials, including scrap metal, with its greater flexibility, enabled her to develop her personal iconography. 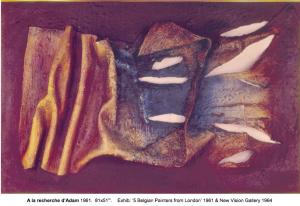 This fine early example shows high relief in folds of felt and the canvas is slashed.  Fibreglass is not yet used which makes this work vulnerable to damage.  It’s present whereabouts is unknown.    This was used to illustrate the article by Pierre Rouve after reading the reviews of her Paris show  who wrote  ‘And yet it is to the mute matter that we must turn, if we are to detect such human eloquence; matter is Marcelle van Caillie’s confessional and the confession is couched in the language of matter. The artist confides to the inert mass her unspoken tensions and lets it convey them in its own vocabulary – hence the disturbing presence of matter that articulates human states of mind moulding them in mounts of dignity and valleys of depression, in living glitter and leering lacerations. This is the miracle : matter, the insensitive, has become a seismograph of sensations. Matter that knows no pain exudes pain.’   (The Arts Review, 28/11/1964) 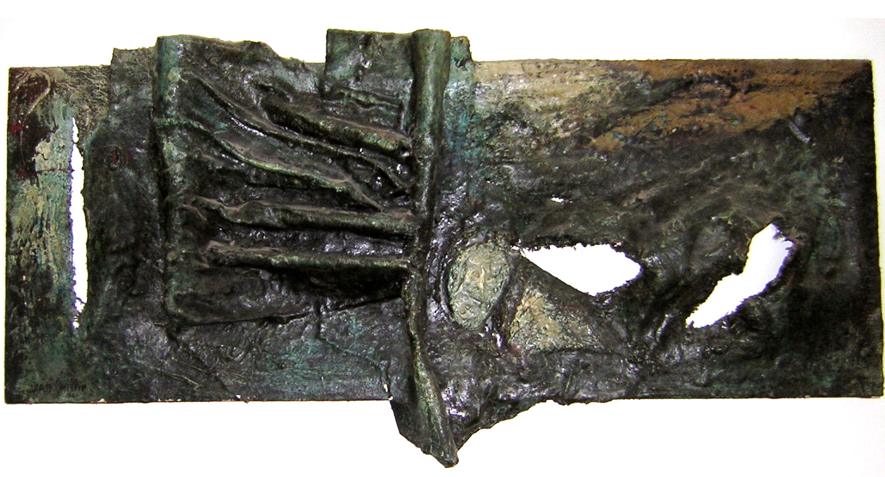 This typical later example shows high relief in folds of felt which over-run the stretcer and the canvas is slashed.

Beth Elliott wrote (2016)  ‘The holes she opens in her surfaces can be seen as wounds, in a positive way.  They are wounds that instead of killing, damaging or weakening her surfaces, allow more inspiration and intuited content to emerge.  ,.. the wound that will not heal also will not kill, but rather convey wisdom from the individual subconscious and collective unconscious.  Either take is very powerful, and this may explain some of the very visceral reactions to van Caillie’s work, both positive and negative’.

Marcelle  admitted that she painted to satisfy herself and the few people (this included  Pierre Rouve) , who had insight and understanding, as in the words of Tchaikovsky “never troubling myself as to what the public would think of my work”..

Photographed in the garden at Wanborough in 2014. 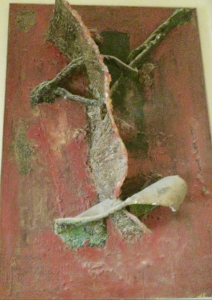 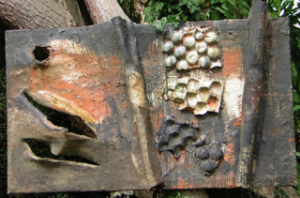 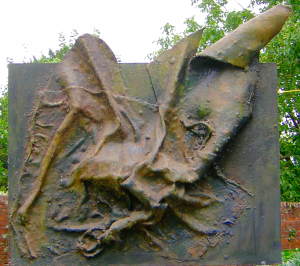 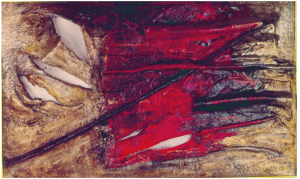 Of this Beth Elliott wrote   “It is doubtful that this picture could have been done by a man”.   It is something powerful.  There’s something very blood-like to me in the red, neither menstrual nor specifically the result of violence (though it could be), that is very matter-of-fact in a “blood and the peeling back of layers of the body happen, this is life, this is natural” kind of way.  I can’t quite articulate it, but somehow it speaks to me of a woman’s unflinching awareness of all of the business of blood.  Blood, but life continues … 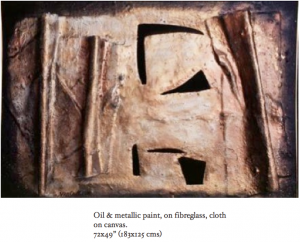 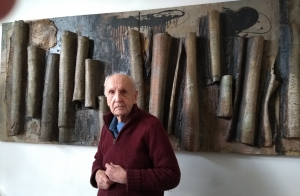 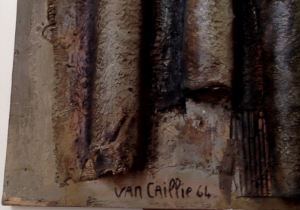 The first of her shields and perhaps the best.   The base was fibreglass but the front was of polyfilla and became damaged 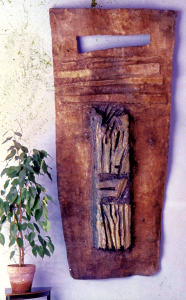